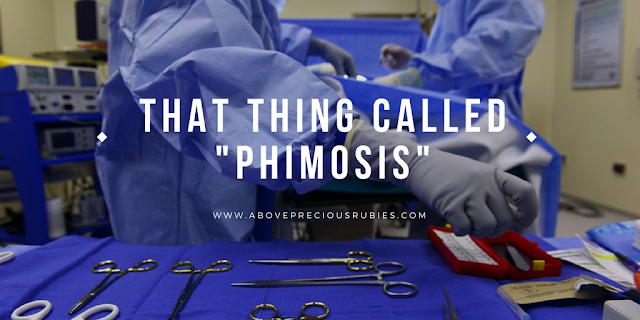 Disclaimer: You may find this post with TMI (too much info).

Last Monday, Nate had to be admitted to the hospital again. It’s his second time this year. And although the stay was a lot shorter this time (24 hrs), the bill was almost the same as the time he had pneumonia.

Sunday evening, he complained twice, masakit daw pag umiihi sya. So my sister and mother-in-law checked his brief and they noticed a few pinkish, red-ish, spots. We knew it was blood. I told Dane about it and he said to get Nate checked immediately. Or better yet, have him circumcised already.

You may wonder why Dane suddenly came to that conclusion. Here’s the story. When Nate was about two months old, we took him to his Pedia because he had a fever and was vomiting. Lab test showed he had Urinary Tract Infection (UTI) as his white blood cells count was super high. It was so high that our friend, who was a doctor thought the lab test was wrong and had it rechecked. At that time, the doctor gave us some medication but told us if his condition doesn’t improve with the meds, the next best option was to circumcise him to prevent reoccurring UTI’s.

Thankfully, the meds healed Nate and we thought everything was good already. Last September, when he had a cough again, aside from another pneumonia (which was thankfully treated by medications), his lab test showed that again, he had UTI. So when he was peeing with blood, we just knew he should be circumcised already. The reason? Phimosis.

Phimosis is a condition in which the foreskin of the penis cannot be pulled back past the glans. A balloon-like swelling under the foreskin may occur with urination.
In young children, it is normal to not be able to pull back the foreskin. In more than 90% of cases, this inability resolves by the age of seven, and in 99% of cases by age 16.
This was unfortunately not the case for Nate. Because of the balloon-like swelling under the foreskin during urination increases the risk of infection, hence, Nate’s repeated cases of UTI. Sobrang liit ng butas ng foreskin which was why it took longer for Nate too pee. Aside from that, nung baby pa si Nate, sinabihan na din kami ng dati nyang pedia na kung gagaling man sya sa UTI nya that time, there’s a possibility na babalik parin. Nate very seldom eats salry, junk foods. He doesn’t drink lots of soft drinks, malakas din sya mag-tubig. So to avoid things from getting worse, last Monday, at around 7:30 PM, Nate was circumcised.

I thought this wouldn’t happen until he reached grade school, just like most boys. I guess, the earlier the better? At least we won’t have to worry about this anymore. Had I known this would happen though, I wish we’ve had it done when he was still a newborn.

0 Replies to “That Thing Called Phimosis”