Ever since I got married, especially now that I have Nate, I request NSO-related documents online. It’s a lot more expensive since the payment is doubled but if I think of the hassle that I have to go to (think queues, time wasted, fare, food orders when I get hungry, Nate tagging along) just get an NSO- (now PSA-) authenticated documents, doing it online is still waaaaaay more convenient.

Let’s talk about DFA (Department of Foreign Affairs) – we all know how hard it is to set up an appointment online with them. If been trying to get one since June 2017. I was finally able to schedule one for September 11. Unfortunately, though, Nate was extremely sick that time so we had no choice but to cancel.

I was hoping we could just apply via priority lane since Nate is 3 but when we went to DFA Cubao on October 2, the guard wouldn’t let us in for two main reasons:

1. Yes, Nate is for priority lane but I am not.
2. Since my passport is also expired, Nate can’t apply because I have to have a valid passport.

Thankfully, I got another appointment which I’m still thankful to God even now on October 14. Guess where — in LUCENA, QUEZON! lol. But still, thankful ‘coz other branches either don’t have any available appointment or the nearest appointment in November. We need the passports in January so we can’t waste time.

Last Monday, I looked at the requirements one more time just to make sure we have everything. I’m hoping we won’t have to go back to DFA Lucena to submit missing requirements. Then I was in a panic because I don’t have a PSA-authenticated birth certificate. I’m not sure if DFA still accepts NSO-authenticated ones but their list says PSA-authenticated. So for the sake of assurance that I’m bringing the right document, I immediately ordered for another birth certificate online.

After a few hours, I checked my requirements again (paranoid ba? haha) and all of a sudden, there’s a PSA-authenticated birth certificate for me already! Ugh!

I was not expecting a refund but I still tried contacting NSO helpline to see if they can assist with order cancellation and getting my money back. I emailed them the same day I placed my order.

I was unable to reply right away so they called spoke to me on the phone. The day after, I got a message confirming order cancellation. 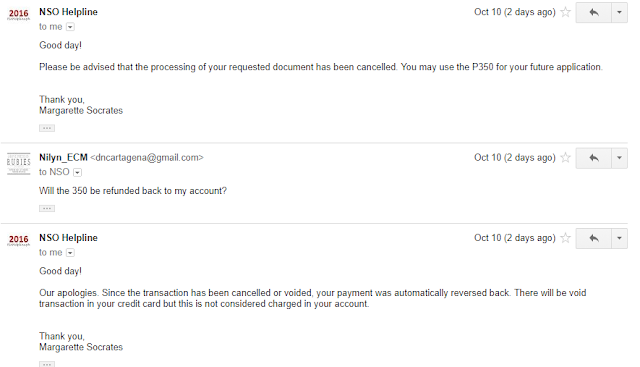 I have checked my card transactions and yes, I the charge was voided. I’m happy they were able to cancel. Although in case they couldn’t, that would’ve been fine, I’ll just keep the document for future use. But it’s still a lot better that the order was canceled so I can use the money somewhere else. And I can just reorder when I need one.

I’m guessing as long as the order is not processed yet, then they can still cancel. I didn’t ask though. Have you used NSO helpline before? Did you have to cancel any order? How did it go?